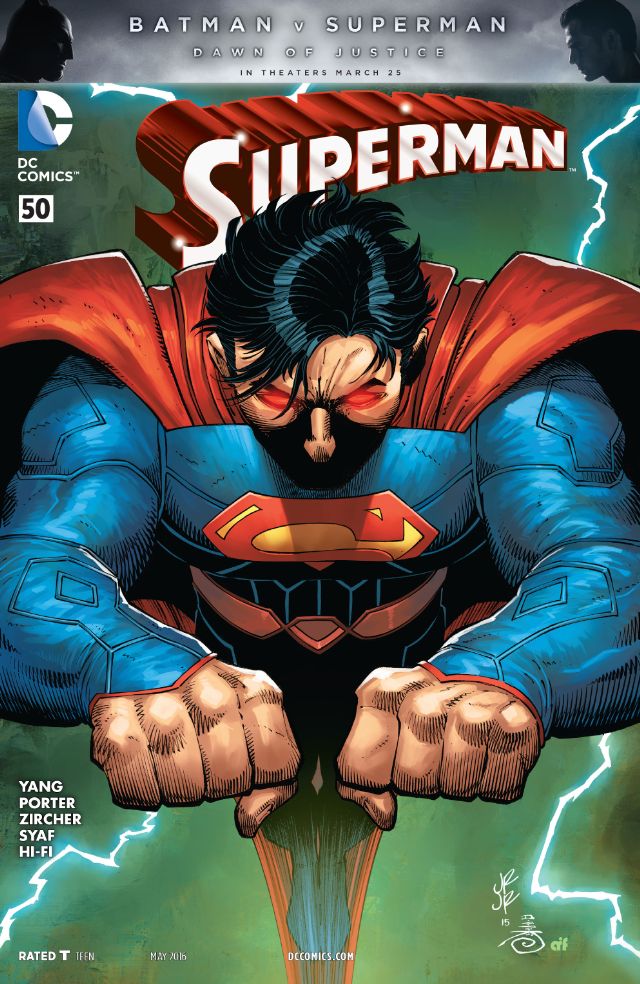 Superman might have his powers back, but the “Truth” storyline isn’t quite over yet — and there are still a lot of unanswered questions.

Will Vandal Savage become more powerful than ever? Will Clark Kent return to his life in Metropolis? Will he get together with Wonder Woman, or Lois Lane?

And what was the point of the “Truth” storyline anyway?

Gene Luen Yang, writer on Superman since the June start of the “Truth” storyline, is ending his run with next week’sSuperman #50. The writer, who was part of the team that stripped Superman of his powers and secret identity, talked with Newsarama about some of those unanswered questions, about what it’s been like to write Superman and where his work is showing up next.

Newsarama: Gene, we had a chance to read next week’s issue, and it really is the culmination of the entire “Truth” storyline and really explains what the word “truth” is all about. What were you going for in this issue, and how does it bring together all the themes from the “Truth” storyline, concluding who Superman is at his core?

Gene Luen Yang: That’s the theme — we wanted to show that Superman could stay true to himself, regardless of what life threw at him. Life did all these terrible things to him, like took away his secret identity, took away most of his powers.

Within that, he ultimately stayed true to himself. He stayed selfless. He stayed persistent.

Superman #50 is about showing how Superman is Superman in the past, present and future.

Nrama: Yes, there is a bit of time travel involved, of sorts. But I think it’s key that Superman specifically says his father taught him a “truth” long ago.

Nrama: Do you think Superman’s ability to stay true to himself is because of this “truth” that his father taught him — and really, the truths taught to him by the Kents?

Yang: Yes. And that truth is that might doesn’t make right.

I’m so glad you picked up on that! I used that word in that particular sentence very deliberately. So thank you. Thank you for reading it so carefully.

But I think that’s ultimately what separates Superman from Zod, Superman from any tyrant. Superman has the power to be a tyrant, but he chooses not to, because it goes against who he is at his core. He doesn’t believe that strength justifies everything.

Nrama: What was the origin of the idea behind the “Truth” storyline?

Yang: It came out of several team discussions. I worked really closely with the other writers on the other Superman books, with Greg Pak and Pete Tomasi and Aaron Kuder. We had several meetings on the phone with editor Eddie Berganza as well. And this is what came out.

We wanted to do something that would strip Superman away from a lot of what our modern audience would recognize as Superman and show that, even when we was without all that stuff, he still is the same person.

So we came up with this idea of taking away his hero identity, taking away most of his powers, and we just kind of ran with that.

Nrama: Lois was central to your part of the “Truth” storyline. In Superman #50, there’s an intimate embrace. How important was the Lois/Clark relationship to this storyline? And does that embrace at the end mean anything?

It took  while, I have to admit. That took a while to get into a place where I felt good about that. Lois Lane couldn’t reveal Superman’s identity just for the sake of revealing it. She had to do it for a really important reason. Ultimately, she had to do it as a way to saving him as opposed to as a way of hurting him. So it took awhile for us to get to that point.

Ultimately, in the final issue, we wanted to bring them back together — not necessarily romantic. Well, maybe. Maybe. Maybe not.

But it was more about having a moment that shows that his relationship with Lois is important to who he is. She had to be there in that final scene, because she’s so connected to his mythology.

Nrama: Let’s talk about the time travel — which is more like Superman being tempted by the devil. Vandal shows him how things could be if he’s just rule already. What was your thinking behind that?

And I think ultimately, that lies at the core of what Superman is struggling with here. He has to decide. You know, if he took all the power for himself, he could keep everybody safe. That was what Vandal was trying to prove to him. If somebody in Krypton had embraced strength all the way, that person would become the High Chief and he would have been able to keep Krypton safe. Basically, that’s what he’s tempting Superman with now.

It’s like, if you embrace power to the very end, then you’ll be able to keep Earth safe.

Ultimately, I think Superman rejects that because he believes in a balance. He doesn’t believe strength is the answer to everything. He believes that safety and freedom have to be balanced.

Nrama: This is your final issue on Superman. Looking back on your run, what was the experience like? Is there something you’re the most proud of?

Yang: I loved the experience. I felt like it was an incredible challenge. I’m really thankful that I got to work with the team that I got to work with, with artists like John Romita Jr. and Howard Porter. I’ve been fans of theirs for years, so to actually get to talk to them on the phone, to actually get to create something with them was an incredible privilege.

And then I learned a ton, just from working closely with Eddie Berganza and the other editors, and all the writers of the other books. It was a huge growing experience for me.

In terms of what I’m most proud of, I have to say, I’m really happy I got to take Superman to the Bay Area, to my home town. He spent three issues in Oakland [laughs], and that was something I really wanted to do when I first signed on, and I’m thankful that they let me do that.

Nrama: Where else will we see your work, Gene?

Yang: Right now, I’m working on the next volume of Avatar: The Last Airbender for Dark Horse Comics. I’m also doing a creator-owned book with Mike Holmes, and it’s called Secret Coders, and it teaches kids how to program computers. And then I have a few other things in the works as well that I think I’m not allowed to talk about yet.