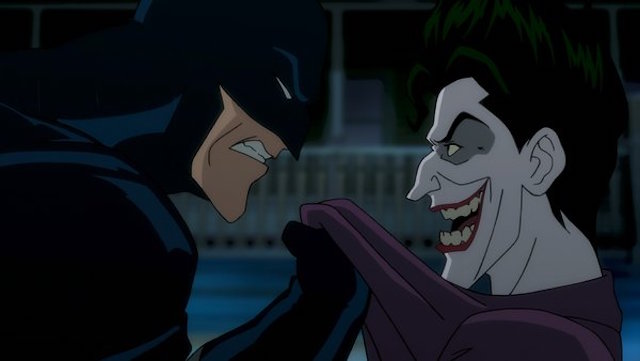 Batman: The Killing Joke movie reunites Kevin Conroy and Mark Hamill as Batman and The Joker

First announced at last year’s San Diego Comic-Con International, the next DC Comics animated film adapts Alan Moore’s classic Batman: The Killing Joke. What’s more, the Killing Joke movie is set to feature the return of Batman: The Animated Series stars Kevin Conroy and Mark Hamill, reprising their iconic roles as Batman and the Joker, respectively. Today, Hamill took to Twitter to share the first Killing Joke movie image. Below, you can also check out a behind-the-scenes image of both stars together, also tweeted by Hamill.

Written by Alan Moore and drawn by Brian Bolland, Batman: The Killing Joke was published in 1988 and is widely considered to be one of the best comic book stories of all time. The graphic novel offers a version of the Joker’s origin story and follows as the Clown Prince of Crime terrorizes Commissioner Jim Gordon and ultimate paralyzes his daughter, Barbara Gordon. Although the story was not originally supposed to take place in the regular DC Comics continuity, The Killing Joke wound up setting in motion the events that would lead to Barbara Gordon becoming Oracle.

The animated adaptation of Batman: The Killing Joke movie, which is expected to debut on DVD and Blu-ray later this year, is executive produced by Bruce Timm and will retell the classic tale. It will also feature an original 15-minute prologue that helps set up the story, giving even longtime fans of the story something new to look forward to.

What do you think of the look of The Killing Joke movie? Let us know in the comments below!